B. Greene: Well, can't you tell us how you passed over and how you found yourself?
Voice: Oh, I died!
B. Greene: Can you tell us how you found yourself, your reactions on finding yourself so-called dead?
Voice: Oh, I was - I was sitting in my chair - I was sitting in my chair, you know. And I was reading the news-paper which had just come, you know. And I felt a bit sort of odd like, you know, and I thought, well, that's funny! I took my specs off, you know, put them on the table and I thought, well, just sit quiet for a minute and it'll pass off, you know.

But - er - the next thing I knew was that I was sitting there, but I wasn't there, I wasn't! I was, I was sort of standing, so it seemed to me, standing by the chair, looking at myself! And there was the newspaper on the table, my glasses, and I thought, this is odd! Very strange, you know! I couldn't make head or tail of this at all.

And then I was conscious of the fact that there was someone knocking at the door. I don't know how - it was funny that - I was standing there sort of looking at myself sitting in the chair and yet it was as if I could hear this knocking at the door and at the same time - almost in a minute - a second - I was able to see who was knocking at the door, yet I was still standing in the room. And it was my sister. She lived a few doors down the road, you know. I thought, oh dear, what am I going to do? 1 can't open the door, I don't think, and in any case it's - you know, I was in a proper sort of panic.

Anyway, what must have been only a few minutes, she came back with a policeman! Eventually the policeman got in at the window and he came into the room, and I recognised him, I'd seen him many a time on the beat. It was quite a time before I could understand what was going on. Anyway he shook me. He thought I was asleep, you see, same as I did, and nothing happened.

And then he realised I was dead and he opened the door, of course. My sister came in. She was in a proper state, I tell yer! Of course that was all I had left, my sister at that time, May. And - er - anyway they went for the doctor, of course. Old Dr Foskett, he came, you know, but he was no bloody good anyway! I mean, he couldn't do anything for me, I mean, it was obvious then. I realised myself that I'd 'ad it! And I was trying to sort of calm down my sister. She didn't take notice of me. I went and stood - and sort of put my hand on her shoulder and tried to tell her I was all right, it was not me that was there, that I was standing beside her. But she probably didn't seem to cotton on at all to the fact that it was me at all. She just sat there and - a proper state she was in.

Anyway - and then the doctor, he went, and then they came - they took my body away, you see. They slumped it down like an old sack of potatoes and I thought, I'm not going after them, I'm going to stay 'ere in me 'ome I might as well sit down in my chair now it is empty. So I sat down there and tried to think it all out.

Anyway, my sister by this time she'd gone off and I was alone in the house again. And all of a sudden, it was just as if the fireplace disappeared! It's the only way I can put it. And there, where the fireplace was, it was as if the wall had disappeared and I could see beautiful green fields and trees and a little sort of well, I was going to say it was a river, it was more like a little brook.

And I could see something - something - at first I didn't know what it was, coming up towards me in the distance and I made it out, and it was a figure. And it was my mother!

Dear, oh dear! She looked, oh as I'd seen her in the picture which I'd still got in the room hanging up on the wall as a matter of fact, my mother when she was first married. She came right up to what was the fireplace, towards me. And she was smiling all over her face and she was as happy as a sandboy. She says: "Come on", she says, "you don't want to stay here! It is no good sitting here, no one's going to take notice of you. May won't realise, you know. You have to come and be with me, you see." Anyway, I went with my mother. And it was funny going through this what had been my fireplace and into this lovely sort of countryside......... 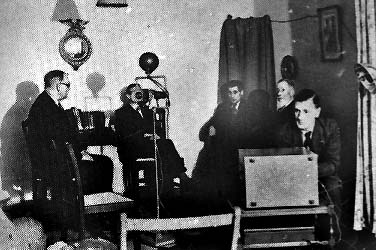 (This is just one of the many stories ordinary people told at the seance room of the late British medium Leslie Flint. What makes it extraordinary is that the voice did not come from the medium's mouth but manifested in a point in space at a distance from the medium. In rare cases the figure of the communicator materialized. Flint has been tested many times. See photo of a test by members of the Society for Psychical Research in 1948)

More about this phenomenon read my page: Death no End (click)