Throughout the ages man have been impressed by intimations of presences manifesting themselves through chosen channels: shamans, mediums, clairvoyants. The earliest descriptions are found in Chinese literature dating back four thousand years. Mediums were called wu at the time and were often consulted, even by emperors. These mediums claimed to transmit advice given by spirits of the deceased.

The phenomenon may also present itself when people come together with a common objective. It seems that their minds fuse, creating a common field. In it a presence may manifest itself in such a strong manner that it is not recognised anymore as being part of the participants.

The ability of the subconsciousness to dramatize is another aspect that is to be taken into account when this phenomenon is explored. The most common instance being dreams composed of various elements: reminiscenses, sensory stimuli, etc. However absurd the dramatization, the dreamer has no doubts about its authenticity. The same is true for a hypnotized person. He may respond to the most unbelievable suggestions. He may be told in trance that he originates from Mars and will whistle the top ten most popular hit tunes on that planet for that week, when asked to do so. He will unfold an umbrella in a living-room when someone sneezes upon a unconscious suggestion. When taken to account for it he will invent all sorts of explanation to rationalize his strange behaviour.

We might even pose the question whether the 'I', the consciousness in a human being is not a presence. Its identity is sustained by the memory of the human brain, its characteristics by the genetical code and other contributing factors. In abnormal cases a number of rival personalities may manifest who struggle for control of the same person: multiple personalities.

This mystery seems connected with that of the nature of consciousness. Consciousness arising in closed systems as fractals,

The question then arises, should we attribute all impressions of presences manifesting themselves to properties of the sub-conscious mind or is another element involved?

The mysterious element in genius and creativity

The creativeness of the subconscious mind is generally recognised. The act of creation and genius involves an element that rises above the mere superior technical achievement. Artists in the various arts testify to their creation being taken out of their hands, as if the spirit takes over and endows it with a sublime quality, transforming it to a masterpiece inspiring the hearts of man throughout time.
Authors find figures created in their books assume a personality of their own and guide the author to unexpected plot developments. Tesla saw his inventions (alternating current generator) completely at work before his mind's eye.

So many great composers have testified that melodies presented themselves spontaneously. They felt being partaken in an inspiration that seemed to be outside of their own reach.
Musicians experience that during performances their being seems to merge with the music they play, transforming and adding to it an extraordinary spiritual quality. It is as if their play develops by itself taken over by 'something else' beyond themselves.

Kenneth Ring Ph.D. well-known for his research in this field writes about Near-Death-Experiences: In the midst of this timeless perfection, however, you become aware that somehow associated with this light there is a definite presence. It is not a person, but it is a being of some kind, a form you cannot see but to whose consciousness your own mind seems now to be linked. A telepathic dialogue ensues. The presence informs you that you must make a decision whether to remain here or to go back.

The biblical prophets spoke of being inspired by a being referred to as Jahweh. Their submission to the voices they heard was so great that Abraham was prepared to kill his son Isaac for an offering.
Prophet Muhammad was instructed in dreams, visions, but also by a voice.

Hints of a high presence manifesting itself amongst kindred spirits may be found in S.Matthew 18, 20, when Jesus says: "For where two or three are gathered together in my name, there am I in the midst of them."

Another instance is that of the manifestation of the Holy Spirit in the first Christian communities.
Acts 2, 3/4: "And there appeared unto them tongues parting asunder, like as of fire; and it sat upon each one of them. And they were filled with the Holy Spirit, and began to speak with other tongues, as the Spirit gave them utterance."
The 'Presence of God' manifestation is one of the most coveted experiences in Christianity

Krishnamurti relates of a presence developing itself in a room. Often he gets an head-ache later (super-sensitivity?). Mary Lutyens writes in The years of fulfilment(pg.186): "To this he replied instantly, 'Can't you feel it in the room?' She adds: "I am quite devoid of any psychic gift but at that moment I did feel a sudden extraordinary throbbing which seemed to fill the room." (pg.228).
Krishnamurti referred to the presence in terms as: the "other", the "immensity", "benediction" and sacredness". He described it as follows: "The room became full of that benediction... It was the centre of all creation; it was a purifying seriousness that cleansed the brain of every thought and feeling; the profundity of it was not measurable, it was there immovable, impenetrable, a solidity was as light as the heavens...It was 'pure', untouched so ever dyingly beautiful." 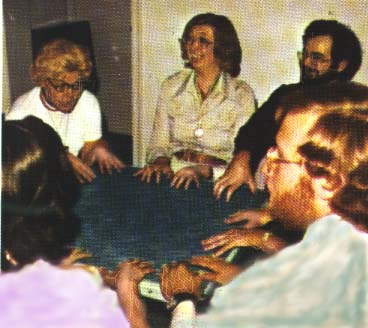 That presences may differ to a great extent is seen from reports of manifestations in the seance-room. In Conjuring up Philip Iris M.Owen and Margeret Sparrow, members of the Toronto Society for Psychical research, tell of the experiences they had in sitting for a psychical phenomenon in 1972 (see photo. To give their efforts a focus they invented a man named Philip, decided on his personality and physical characteristics, gave him a time to have lived, a background with names and dates, a loveless marriage etc. All a product of their fantasy. Yet after they sat for months an "entity" made itself known by raps. They made a code to communicate with him by means of such raps. In the course of their experiments their table has flung itself across the room, followed members about, and has exhibited a unique, sometimes playful, personality answering after the name Philip, who confirmed all data invented for him. Another group was set up afterwards with similar results.

Another series of experiments along the same lines was held in the late twenties by Dr. T. Glen Hamilton. In his book Intention and Survival he relates how he sat with great patience with some people until trance-personalities even materialized ectoplasmic forms, many of whom were photographed.

Of course spiritualistic literature abounds with similar cases. The modern wave of spiritualism began about 1847 and held the Western world in its grip for almost a century. 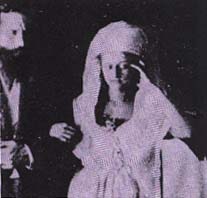 Prof. William Crookes, Nobelprize winner as a great phycisist, made photographs of materializations in his laboratory in 1870. He remained convinced of their genuineness all of his life, although it cost him almost his career.

Millions of similar manifestations have taken place in spiritualistic seance-rooms, but they have been forgotten and are considered to be faked by fraudulent mediums. Yet, a person who takes the time to study the enormous literature cannot be but impressed by the (physical) phenomena described. Undoubtedly many of them may have been tricked by mediums.But those who dismiss all of this body of testimony as worthless appear to be on the wrong track and do not appear to exhibit that inquisitive mind vital for new insights.

Although few physical mediums are known nowadays efforts are being exerted to breathe new life into these rare phenomena.

Paranormal phenomena come to the publics attention scarcely as sceptics influence the media. Yet spontaneous cases as the Electronic Voice Phenomenon, poltergeist phenomena and lately the 'Charlie, Charlie' pencil game amongst kids become a news item. Sceptics are hastely called in to declare it all a fake or furnish a ridiculous explanation.

On a subject like this many areas remain to be explored, as the relationship with the psychological phenomenon of multiple personalities. Do they have any relationship?

Another significant field of research worth mentioning is that of Dr. Michael Persinger's Neuro-theology. Stimulating the brain with magnetic signals induced in subjects mystic, religious, and spiritual experiences. Sometimes they also felt a presence developing.

American psychologist J.Klimo has written a study: "Channeling: investigations on receiving information from paranormal sources" (1987) that may be recommended.

A great many subjects worth investigation have been brought together on this page without coming to any form of conclusion. Consciousness and 'presence' remain unfathomable qualities of life.
One may wonder, going further on the path of speculative thought, whether the phenomena discussed are all part of a broader fundamental issue: 'What is the nature of consciousness'?
As we have seen in the above chapter on perfect works of art, the 'spirit' apparently enriches them with a mysterious quality. In a broader sense one might speculate whether not all systems are endowed by nature with a form of consciousness. Linked together a self-conscious 'I', or soul comes into being. That 'I ', in turn has the capacity to link up with other higher forms of consciousness and so forth.
Thus behind the facade of apparently mechanical physical forms lies a structure of unseen interplay of Life with matter, like a spiritual internet. From another level one may wonder whether there is any division between life and matter. Persons who had a marvelous instant of 'cosmic consciousness' (Click here for a description)describe their experience as feeling not only one with the universe but also with all and any of the forms that make up all of its wondrous splendor.

Meanwhile click on the following links for other papers: