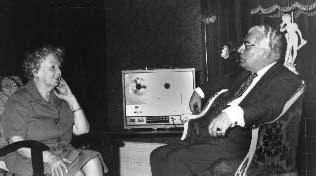 On 20th August 1962 a voice manifested in the seance-room of British medium Leslie Flint (see photo)which claimed to be that of the late Oscar Wilde.

The famous Irish poet and dramatist died in Paris in 1900. By that time he had fallen in disgrace by the prudish society. Once he was acclaimed as an artist of brilliant wit and exuberant fancy. As a dramatist his work was distinguished chiefly for brilliant epigrams.

His plays included "The importance of being Earnest". He was the author of "The Picture of Dorian Gray". His life has been portrayed splendidly by actor Stephen Fry in the film 'Wilde'.

Oscar Wilde came through in the same facetious and sarcastic manner for which he was known whilst on Earth. At first it was not clear who was talking. When Mrs. Greene asked for his name the voice answered:
"My name got me into a great deal of trouble when I was on your side!"

Mr.Woods interjected: "When we play these tapes to other people, you see, they ask who it is."

"You can tell them it is Colonel Bogey!"

When he revealed his name finally, George Woods asked:
"Mr.Wilde can you tell something of your life on the Other Side? What are you doing?
Wilde: "I must admit it's a relief to be asked to discuss one's life over here, in preference to one's life when on Earth, because in any case my life on Earth is pretty well known among the gossip-mongers! If I were to say to you that my life here is not unlike my life on Earth, you'd probably be very horrified! But it happens to be perfectly true, and I've no regrets about it whatsoever..... My reputation does not worry me, but it seems to worry a hell of a lot of people on your side! More money has been made out of my reputation since my death, than ever I was able to make out of my plays, which goes to say that sin is very successful!"

Woods: "Have you met Bernard Shaw on that side?"
"Oh, I have met Shaw, of course I've met Shaw. What a man! Extraordinary character - brilliant, if rather - well, I'd better not say these things. I'm supposed to be to some extent developed!"

Woods: "You still write plays on that side?"
Wilde: "Oh, one still writes, one still continuous. Our world in some senses, as no doubt you have heard, is very similar to your Earth. We have all manner of scenery which you are accustomed to, even more beautiful. Nature as you know nature exists here, but the worser aspects, or the more irritant aspects of nature are non-existent to us. For instance, we don't have the pests, such as flies, earwigs, and all the irritating things that nature concocts to annoy man. These things seem to have disappeared fortunately."

"We seem to have all the beauty and loveliness of nature without the petty irritants. No more swatting flies! Oh, I used to know a woman once, who used to love sitting all the afternoon in a chair with a swatter, and she had a swatting afternoon! I often wonder what she must be doing here without a swatter, without the flies to swat! Oh, a long time ago, things have changed. Ik look at London and hardly recognise it. Thank God, I lived before my time!"

The following is a streaming audio sound clip of part of the conversation. One hears the medium several times lauging and coughing:

Wilde:"My reputation does not worry me, but it seems to worry a hell of a lot of people on your side!"

Woods: "Your books are very valuable in knowledge."

Wilde: "Anyway, more money has been made out of my reputation since my death, than ever I was able to make out of my plays, which goes to say that sin is very successful!"

Greene: "You see, Mr. Wilde you always had very open mind, didn't you?"

Wilde: "My mind was always very wide open and, as you say, above the average. Can you tell me what the average is, and how open a mind should be? I was always ready to receive inspiration. Indeed I might say that my most successful works were due to the fact that I had an open mind and in consequence much that was poured through it of inspiration - er - which was highly successful, and I feel sure that if it were not for the fact that I was high-minded, you wouldn't have had perhaps, some of the successful works that I was able to perform. But of course all this is a matter of dispute among many people. One man's rat poison is another man's meat!"

Betty Greene: Oh no! I think every writer is inspired from somewhere to a certain extent"

Wilde:"Oh, don't take away our own personality, my dear, please! But I'm quite prepared to admit I van inspired. I was always an inspiring figure; in fact, now I've become almost awe-inspiring! Possibly because I'm dead!"

Wilde: "You wish me to drop the flippancy and be serious? To be serious is often to be boring"

Wilde: "So many people, when on Earth, were so serious that they couldn't fail to be utterly boring. I refuse to join such a gathering!"

Betty Greene: "No, please don't drop it, because it wouldn't be you if you weren't like that."

Wilde: "This I do deliberately, because there will always be people who'll say: 'How do we know that this was Oscar Wilde?' - And so I am expected to come back very much the same, with the same attitude towards life, and towards people, and to say the same sort of things that would be expected of me. So, for your sake, I do this because I know, poor dears, you're struggling sodesperately hard to convince. And if I can assist you to convince, then it may wipe out some of my blots!

The voice went on to speak for some time and then trailed off for lack of power.

For further another sound clip of Oscar Wilde, info, links to other transcripts, and (.wav) sound clips of direct voice communications of other souls click on the link below: